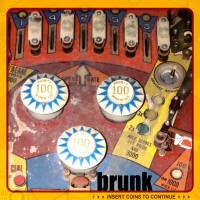 Bert Vanden Berghe (BVB) is a 31-year-old Belgian (Flemish) musician from Ghent who is known by his aptitude to get embodied into many aliases. brunk, invertebrata, Passive Cable Theory are the names as the most known ones amongst his other projects. He has also appearing in the lineup of such groups like Karen Eliot (with Luther Blissett), The Returns, and Skully SlanginG. As summarized, all it is a very diverse stuff, ranging from the examples of alt-folk, straightforward pop punk and twee-pop to free form guitar improvisations and noise music.

Though Insert Coins To Continue LP has been released under WM Recordings this year, this is the old album recorded and completed between 2003 and 2006. In some sense it is a kind of trash one, because the ICTC at first started as a bunch of leftovers and unfinished ideas. For a while BVB didn't have definite plans what to do with them, they didn't fit onto any album he had worked on until then (the albums so lo so fi and none of the above are mentioned herein). He has done everything on his own, has played some acoustic parts, bass guitars, a lot of electric guitar parts, recorded and edited in all kinds of ways, using an mexican Fender Stratocaster and an modified Epiphone Les Paul, a cheap acoustic guitar, and a Squier Jazz Bass, also used some cheap dynamic microphones. Some recorded sounds and voices are also derived from TV. Some samples are taken from seven-inch vinyl recordings of some kind of library music - farm animals, car and plane sounds, weather sounds. In addition of it, there are also represented scratches, buzzes, crackling.

However, face to face with previous brunk albums it is absolutely the different one. First 20 seconds consist of a blend of defective electronica, acoustic guitar touch, spoken word and ragged guitar riffs which will predict us what will be happening next – it could describe as in a fashion of anti-manifesto per se. A kind of destructive posture in reference to his previous works as brunk. Furthermore, some song titles are also marked bellicosely, or otherwise just have a meaning referring somehow to deflexion (got it!; carcrash; blitzkrieg; mechanical errors; berror; violence on tv). At never ever ever, the blasting attack by three first tracks will be displaced and changed into dreamy mood music, as if we were back to quiet and melodic brunk again. However, shifts (a mix of heavy metal riffs and dub guitar), flipperkast dub (experimental-fashioned dub with guitar solos and wah wah effects – one of the best tunes on the album!). de wraak van de kiekens (similar to zip) is dominated by jazz guitar-alike sound and programmed beats. Indeed, it would be very good chill out track as well if it had much more longitude to come over us. The another possibility is just to push “repeat track” button on, and keep enjoying it... . There run also some floating bubblegum funk undercurrents (this should be played at high volume... preferably in a residential area!) being so characteristic to sampledelic or samplecore music that I am pretty convinced Bert Van Der Berghe has listened to Chenard Walcker and Felix Kubin a lot indeed. violence on tv reflects through its sonic aggressiveness and insane variability the meaning of the song title at its best. Furthermore, some knotty organ passages and a haunting orchestration segment have added some odd dimensions to all of it. However, in general and broader sense, the only artist who might have some reminiscence to BVB`s recent work is a Russian avant-garde combo Burrito (especially their doings and tearings around on the album Fridtjof Nansen (2008/2009).

At first sight the ICTC would probably seem to be sounding too harsh to your consciousness to get broken through to. Indeed, it is like the tzunami of overloaded information flowing on you at high speed, destroying and flushing all around you, letting you live and waiting with dread the coming of the next wall of noise. The one and only question which could be questioned is – are you able to channelize all this information into understandable form for yourself? In fact, the more I listened to it, the more I enjoyed it.